Welcome to FIDIC for Practitioners

Under a FIDIC contract the Engineer shall make fair determinations (see Sub-Clause 3.5 FIDIC 1999 or Sub-Clause 3.7 FIDIC 2017) and certify fairly the amounts due (Sub-Clause 14.6 FIDIC 1999). Talking about Engineer´s fairness means to demystify its role, and yes we are talking about its role not its character or personality. The Engineer´s role is not god-given. The parties could live without the Engineer´s powers and authorities; whether they would then have less problems or whether this would be more appropriate is however questionable. Anyway its role and function does not merely depend on his integrity, skills and honesty. Under a FIDIC contract the parties rather define a role or function of a person, in FIDIC this being the Engineer, who shall determine matters arising out of or in connection with the contract. He shall do so fairly but not as an adjudicator.

To play fair does mean not to take arbitrary decisions. Rather it means to make fair determinations and to certify money in accordance with the Contract, thus in line with what used to be the basis on which the Contratcor submitted its offer. In other words the Engineer and the Parties shall apply the contract and enjoy the respective benefits and entitlements. Also the Contract reflects what FIDIC consideres to be recognized best practice. FIDIC 2017 clarifies that in matters of determination the Engineer shall in future act neutrally which is a new term but not a new policy.

Nestor Bildungsinstitut together with FIDIC have decided to provide FIDIC seminars in English. The seminars shall cover the well known FIDIC modules, e.g. modules 1 to 3 but also more sophistacted courses like courses on the Design, Build & Operate form of Contract and the FIDIC Subcontract. However Nestor FIDIC seminars are mainly adressed to Civil Law Practitioners using FIDIC forms of Contract and Common Law practitioners who work under Civil Law conditions. Modules 1 to 4 cover the FIDIC Rainbow Edition 1999 and 2017, namenly the FIDIC Red Book, the FIDIC Yellow Book and the FIDIC Silver Book. The venue for all English speaking FIDIC seminars is Copenhagen.

FIDIC forms of Contract may be used for all types of projects throughout the world. The answer to the question which form is suitable for a particular project depends on whether the Employer intends to bear the design responsibility or not. If the Employer decides that the design shall be made by himself or its behalf the FIDIC Red Book is appropriate. If the Employer prefers that the design is with the Contractor then either the FIDIC Yellow Book or the Silver Book can be chosen. This decision should be taken with skill and care after having made a risk assessment. The FIDIC Subcontract for construction is fit for use with the FIDIC Red Book.

In 2011 FIDIC published the new Subcontract form which is suitable for use with the FIDIC Red Book 1999 (and with the FIDIC MDB harmonised version (the Pink Book) if suitable amendments are made). In 2019 the Yellow Book subcontract followed. Nestor courses cover this new FIDIC product from 2013 onwards.

All FIDIC trainings also cover the FIDIC  Golden Principles as launched by FIDIC in 2019.

Nestor FIDIC trainers are experienced practitioners having been and being involved in projects throughout the world. They are ready to share their experiences and skills with the attendees.

All Nestor tutors have been involved in various capacities in the drafting of FIDIC 2017, 2nd Edition and they are accredited FIDIC trainers. 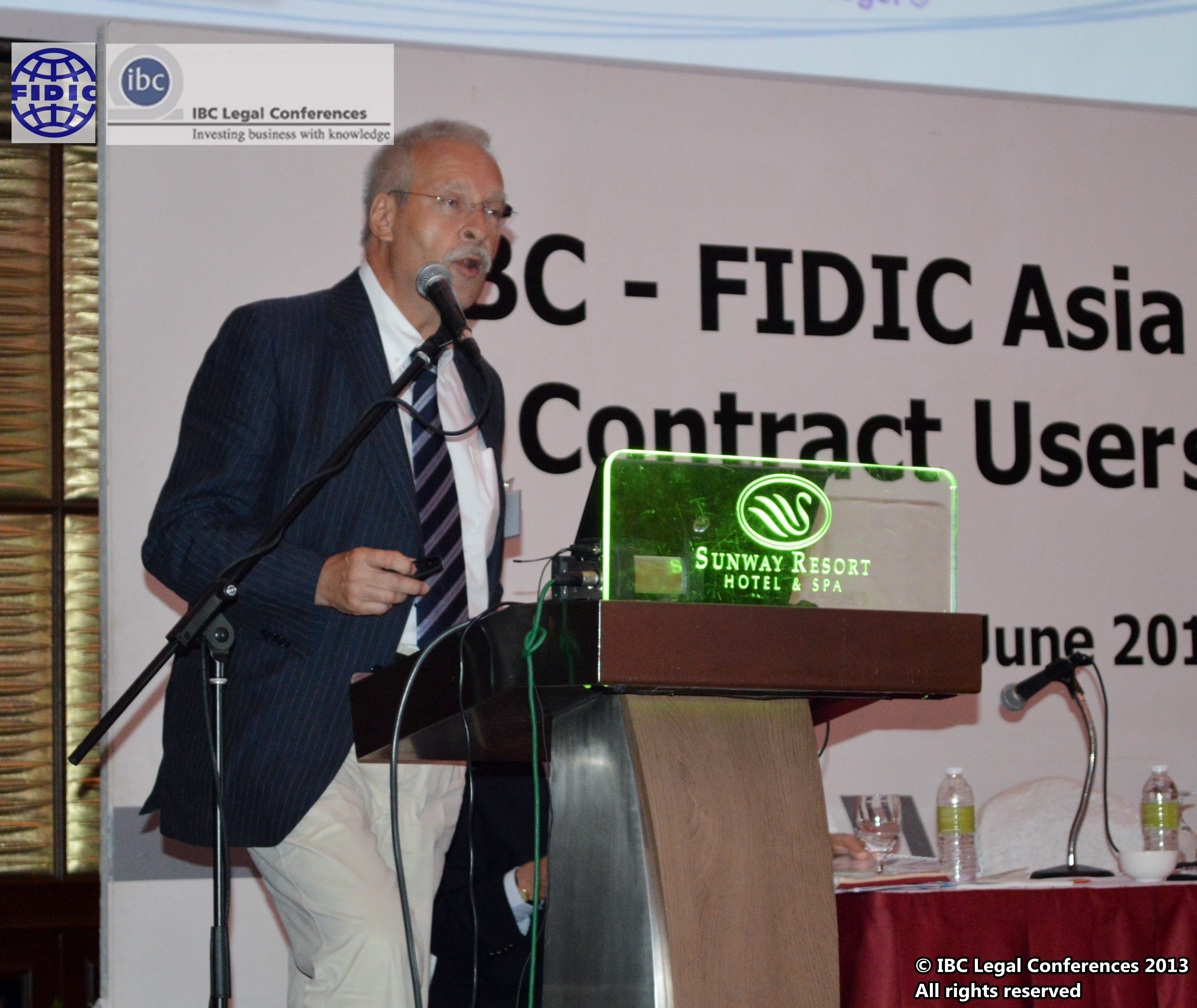 Rechtsanwalt Dr. Götz-Sebastian Hök
Sebastian Hök is graduated in Law from Göttingen University and is a German solictor registered at the Berlin Bar. He has extensive international project and commercial experience gained while living and working in Europe, the Middle East, Africa and Asia. For the past 20 years he has been partner and senoir partner of the law firm Dr. Hök, Stieglmeier & Kollegen. Sebastian Hök is acting as arbitrator, adjudicator and legal counsel. Since 1997 he is a lecturer at Berlin University of Applied Science for construction management law. He also lectures at Leuphana University (Lüneburg) and Southeast University (Nanjing). In 2021 he became the director of the International Contract Adminstrazion Engineer programme at Leuphana University.

Since 2009 Sebastian Hök is a FIDIC listed Dispute Adjudicator; since 2007 he is a licensed and accredited FIDIC trainer. Since 2021 he is also FCL certified adjudicator and FIDIC trainer.

Sebastian Hök has written various books and articles in French, English and German on FIDIC forms of contract. He is a co-author of the well-known textbook entitled (FIDIC for Practitioners) and member of the German Dispute Adjudication Assessment Panel and former past Chairman of Eurojuris Commission International Litigation. He his currently involved in two FIDIC task groups as legal advisor. Moreover he used to be a member of the JICA DB study team. 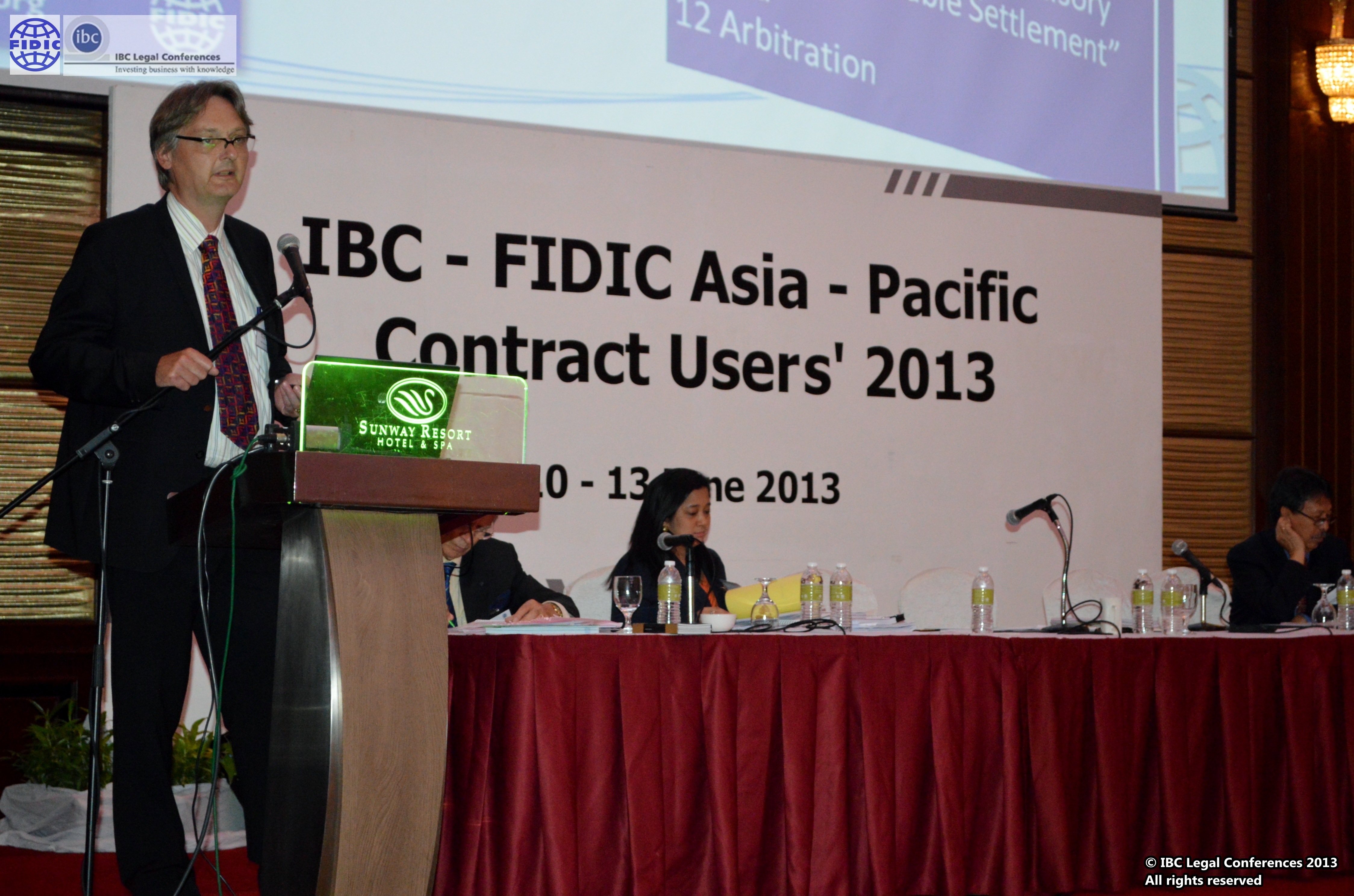 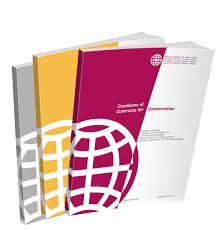 The Subcontract course deals with the FIDIC Subcontract for Construction. All four courses will be held once a year.

A particular core aspect of these courses is to explain the legal wording against its commmon law background for further use in civil law jurisdictions, such as Eastern Europe or the Gulf Region. It is crucial to understand the meaning of the terms such as Claim, Defects Notification Period, Delay Damages and Extension of Time for Completion against its common law back ground though the Contract will be used under civil law as per Sub-Clause 1.4 FIDIC.

All courses will refer to existing ICC awards and other case law for illustration purposes. Case Studies and examples as well as standard letters for further use will be presented.

The Nestor course system has been a great success since 2012 and will be continued. Course materials are continually updated (including the 2017 FIDIC updates).

The training course is designed to provide practical guidance to those who are involved in managing or administration of projects where use of FIDIC forms of Contract is intended. The course covers management disciplines and procedures in pre-contract phase of the project including the FIDIC Client-Consultant Service Agreement and selection of the appropriate FIDIC form of Contract. The course also covers the post contract award phase including all contract managment disciplines & dispute managment procedure.

It is suitable for all the Parties involved with a new FIDIC Contract – the Employer, the Project Manager, the Contractor, the Engineer, and the DAB Members. By having a good understanding of the FIDIC risk allocation policy and the resulting responsibilities and rights of the Parties under a 1999 & 2017 FIDIC Contracts, a more efficient management of the project may be achieved. The tutors of the course are a very experienced German engineer and a German lawyer, who both have had extensive worldwide involvement with management of projects and related dispute resolution. Both tutors are the authors of the FIDIC Guide for practitioners.

The training course is designed to provide practical guidance to those who are involved in managing or administration of projects where use of FIDIC forms of contracts is required. This course covers FIDIC contract management, claim management and dispute management in more depth than module 1.

This course goes through the claims´ procedures and claims including the change clause. It covers CPM issues, delay analysis and Engineer´s views will be discussed. Finally the course will show how a DAB works and explain typical situations in dispute preparation and resolution.

It is suitable for all the Parties involved with a new FIDIC Contract – the Employer, the Project Manager, the Contractor, the Engineer, and the DAB or DAAB Members. By having a good understanding of the FIDIC contract and claim management approach and the resulting responsibilities and rights of the Parties under a 1999 & 2017 FIDIC Contracts, a more efficient management of the project may be achieved. The tutors of the course are a very experienced German engineer and a German lawyer, who both have had extensive worldwide involvement with management of projects and related dispute resolution.

The training course is designed to provide practical guidance to those who are involved in dispute resolution where use of FIDIC forms of contracts is required. This course covers inter alia the use of FIDIC Dispute Adjudication Boards, appointment of DAB´s or DAAB´s, referrals to DAB or DAAB´s, the decision making process, etc. in more depth than module 2.

This course will give a sophisticated and comprehensive view on Dispute Resolution practise under FIDIC Contracts. The course intends to explain dispute avoidance practises and problems as well as the way on how to appoint DAABs. It covers the preparation of DAAB referrals, the conduct of DAAB hearings and DAAB decision making.

It is suitable for all the Parties involved with a FIDIC Contract (1999 edition / 2017 edition and also the FIDIC Gold and Emerald Book) – the Employer, the Project Manager, the Contractor, the Engineer, and the DAB Members. By having a good understanding of the FIDIC contract and its dispute adjudication clauses under a 1999 & 2017 FIDIC Contracts, a more efficient and successful dispute management may be achieved. The tutors of the course are a German engineer and a German lawyer, who both have had extensive worldwide involvement and experience with management of projects and related dispute resolution. Both have been appointed in various dispute resolution procedures and have advised clients on this type of proceedings throughout the world.

The completely updated training course is built upon the new 2017 FIDIC Forms and the sessions highlight the main differences between the 1999 Conditions of Contracts and the new 2017 Edition.

The Nestor FIDIC trainings on dispute resolution also include information on SEA/SH procedures in accordance with Worldbank policies and Worldbank SBDs.

Compliance with FIDIC standards is considered to be very helpful in order to achieve better results.

It is suitable for all who are involved in contratc management under FIDIC Contract (1999 edition / 2017 edition) – the Employer, the Project Manager, the Contractor, the Engineer, and the DAB / DAAB Members. By having a good understanding of the FIDIC contract  under a 1999 & 2017 FIDIC Contracts, a more efficient and successful contract management may be achieved.

The tutors of the Nestor courses are Irish and German engineers and a German lawyer, who have had extensive worldwide involvement and experience with management of projects and related dispute resolution.

This FIDIC course will bring participants the necessary substantial knowledge, skills and insights as to the EPC/Turnkey project management under the FIDIC Conditions of Contract, including the FIDIC Silver Book 1999/2017. Although focusing on the Second Edition 2017 of FIDIC Contract Forms the course will also present the main differences with the First 1999 Edition. Sebastian Hök is member of TG 22 for EPCM contracts. Sebastian Hök has held EPC training courses over the last past ten years worldwide.

Since 2006 Nestor trainers have shown their respective practical experience in the use of FIDIC forms of Contract to provide bespoke training services and project related workshops on the various FIDIC forms to consultant engineers, contractors and employers in Europe, Africa and Asia. Nestor trainers provide seminars and workshops which are tailored to the particular needs or requirements of each client. They can range from an overview of the FIDIC suite of contracts to use of particular forms or particular issues arising under or in connection with the FIDIC forms (such as use of the DABs / DAABs or arbitral tribunals, preparation of tender documents or payment issues and Variations). 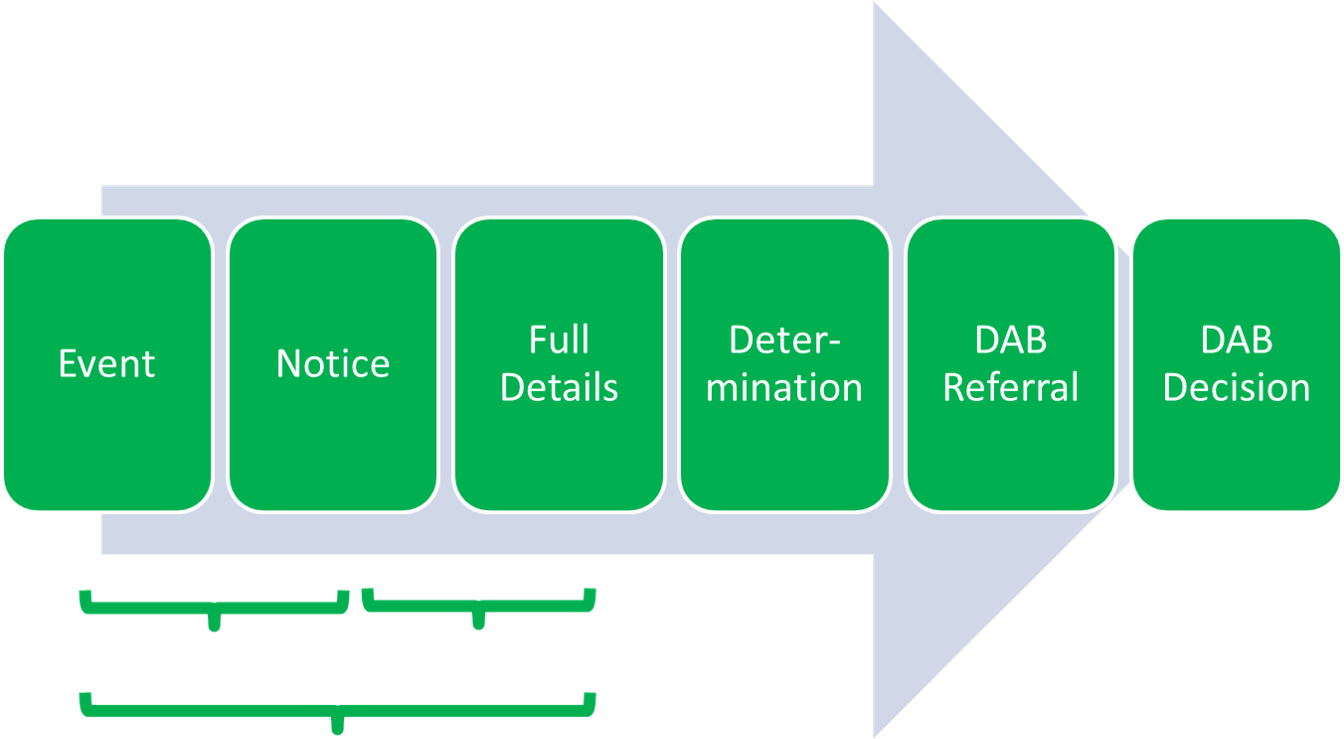 The Nestor training materials include a hardcopy of powerpoint slides and scripts for in depth studies. All materials are regularly updated and reflect current knowledge of practise in various countries including references to local case law. In open house courses the relevant contract forms will also be (made) available. In addition to this checklists, manuals and expalnatory leaflets will be included on a case by case basis. 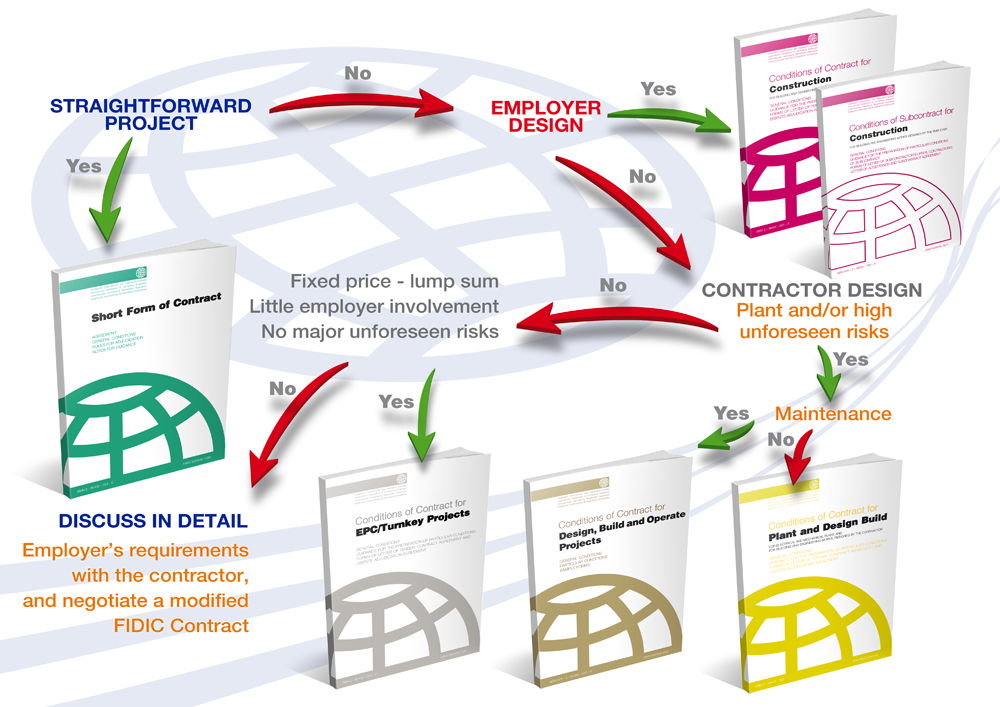